35 replies to this topic

For situations like this, I have a custom fact type "Marriage (Alternate)"

I have dozens of couples whose marriage dates were reported differently in newspapers, marriage records, and divorce records. In these cases, I use the marriage record as my official date, and record the other dates as alternates.

I just tested a couple with 1 each of Marriage and Marriage (Alternate), and both facts (plus Divorce) printed in their FGS. 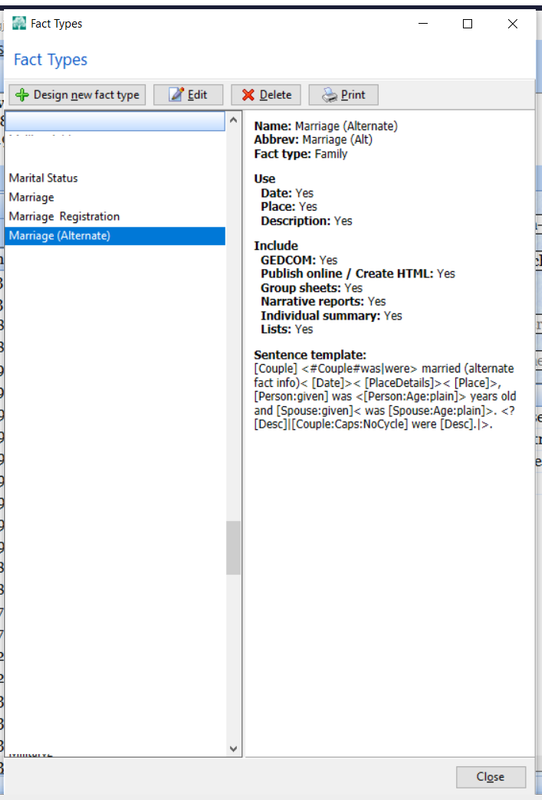 Thank you for the suggestion. I'll take a look at using this. My situation is one in which the couple were married in the United Church, but then had to be married in the Catholic Church as well. It's actually a more common situation than it first appears.

Yes. If I have two or more marriage facts for the same couple, only the first appears in the Family Group Sheet.

I have a couple with marriage & divorce followed by another marriage & divorce.  As long as the events are entered with the same spouse and sequential marriage-divorce pairs, the family group sheet, the narrative report, and individual summary report the data as entered.

I wonder if my situation is not working, because it is a marriage - marriage sequence rather than marriage - divorce? Will have to play with it a bit and see what happens.

I wonder if my situation is not working, because it is a marriage - marriage sequence rather than marriage - divorce? Will have to play with it a bit and see what happens.

In the case of marriage - marriage to the same person, there may be evidence of the divorce in the absence of the actual divorce record. In my experience, marriage records can be much easier to find than divorce records. And marriage records (especially modern ones) often list each spouses's marital status and the number of  previous marriages. So if a marriage record states that a person is divorced, that is evidence for a divorce even if exact date and place of the divorce is not known. And the number of previous marriages can be evidence as to whether there was an intervening spouse who was a different person. This leads to the possibility of entering a Divorce fact with an approximate date and a blank place.

I think the issue is that RM7 is assuming that there is only one marriage event per family group, because a marriage event usually"initiates" a new family unit. These double-marriage situations are a bit of an exception to that rule. To circumvent the internal logic of RM7, I think I may have to clone the marriage event and name it something like "Re-Marriage".

I think there are two "different" situations here that may not really be different.

I tend to agree with you that RM should handle this.
I’ve dropped a line about it to the RM team.
If it is a “bug”, I trust they’ll elevate it in their database.
However; I’m sure it wouldn’t be fixed in RM7 and RM8 seems likely to be a LONG way off.

RM8 seems likely to be a LONG way off.

You know, it's hard to know how long off RM8 is. I've tried to withhold comment because I'm a software person myself and I know how hard software projects can be. And RM7 continues to work just fine for me.

When the announcement was made that RM8 would not be delivered in 2019, my best guess at the time was that there would be about a six month delay. But I recognized at the time that my best guess could be way off. I still feel sort of the same way - maybe it will be out in mid-summer of this year and maybe not. I'm fine either way.

Thanks for your help.

I've written, tested and maintained software for most of my career prior to retirement. I know such projects are a challenge.

However; demonstrating it at trade shows and selling advanced licenses was (in my opinion) a poor choice if the product wasn't near release.

The risk of a major publicly-visible catastrophe or annoying people is just too great. Yet, here we are...

Frankly; I try to use RM7 on a Mac, but the work-arounds to circumvent some of its quirks may cause me a lot of work later on.

It wouldn't be so bad, if I could see that RM7 was being fully maintained and the ongoing issues were strictly cosmetic.

Sigh... I know that sooner or later, I'm going to get frustrated and just write off the year-old advanced license as a bad debt.

So; I sure hope your crystal ball is correct with respect to a summer release.

I have a maie grt grandfather with 3 marriages and they do show on the Family Group sheet.

I have the female names and marriage dates also.

I have a female [niece] with three marriages, without a spouse listed and the 3 marriages do show on the FGS.  I switched the spouses and showed one of them as the male, reprinted the FGS and the other marriages did show on the FGS for the female.

My software is up to date with RM revisions and Win 10.

Genealogy:
"I work on genealogy only on days that end in "Y"." [Grin!!!]
from www.GenealogyDaily.com.
"Documentation....The hardest part of genealogy"
"Genealogy is like Hide & Seek: They Hide & I Seek!"
" Genealogists: People helping people.....that's what it's all about!"
from http://www.rootsweb....nry/gentags.htm
Using FO and RM since FO2.0

Nettie;
These are two marriage dates for the same couple, not three separate marriages that only share one person in common. Yours works because it sees it as three family groups

In my database, I have about a dozen examples of couples in New York City (mostly pre-1925), who went to City Hall or Borough Hall and were married in front of a city official and then a week or two later were married again in front of a rabbi in their home neighborhood. I can think of several reasons this happened. One might be initial objections by family. Or, perhaps it happened because in Austria/Poland, Jewish religious marriages and civil marriages were two completely separate acts (many couples never got a civil license or didn't get one until many years later in order to "legitimize" their children and clean up family paperwork and surnames). Some immigrant families may have been "just making sure" that everything was legal. Most families would have considered the second marriage, the religious ceremony, to be the "real" wedding date.

Those cases of late civil marriage in Europe, which affected many tens of thousands of immigrant families, is not just a little quirk. It is significant genealogically as it explains why families suddenly switched surnames upon immigration or at some point late in life. It might also help explain conflicting data about a mother or grandmother's maiden name.

This exact subject is a huge political issue in Israel right now, where the law empowers only Orthodox rabbis to officiate at Jewish weddings. Many in the country's majority object to this restriction and the requirement that all Jewish couples meet Orthodox standards. Many are demanding the right to have a civil marriage.

In any case, it never occurred to me to check if Family Group Sheets were listing both ceremonies.

If all the common reports leave something out, it would really be helpful to have a comprehensive chart listing the different reports and what key information doesn't print in each one. It's very difficult for some of us to keep it straight.

Yes. Such things worry me a bit, too.

At the risk of seeming to crash in on this  thread.....

I have a question regarding multiple marriages and family group sheets as it applies to the Publisher function. I too have numerous multiple marriages in my tree (example - same husband, different wives). I have found that I have to use more than one family group sheet in publisher. One for each marriage. Technically this works, but it results in duplication of the husbands information, and adds to the page length of the report. Is this correct, or am I doing something wrong?

It does appear that a better choice may be to use the Individual Summary for the husband. Information about all spouses and children is included in that report.

Rick, you will need separate family group sheets, one for each family he made with different spouses.

I checked and if I add a second marriage fact for the same couple it will show both on the Family Group sheet. What I cannot test is having the spouses linked twice to each other making separate family groups. That's because RM doesn't let you create duplicate spouse relationships to the same people. You have to do something funky with merging to get that to happen. I'm wondering if that is the case and you have the same couple linked twice and only see the marriage for the family group sheet you are displaying.